It’s already the first week in May: how crazy is that?! The days are just kind of flying by now as the sun is getting brighter outside and I have the energy to get lots of little chores done. I’ve been cleaning: the garage, the bookshelves, the craft room, and then I weeded out gardens. I installed some solar powered lights outside and changed the knobs on some furniture. These are all small things, but boy do they make me feel good.

Because I was up doing things the knitting suffered a little this week and there was no quilting at all. Trying to catch up I knitted pretty steadily for the last two days. This evening I finished the body of my new V-Neck Boxy and got it cast off the needles.

I just love this color! I want the sweater to be a tiny bit longer than it is right now, but after blocking I’m pretty sure it will be the length that I’m hoping for. Tomorrow I start the sleeves…  My Ravelry notes are here.

By the way, I just have to mention this: after 6 weeks on oxygen my lips in that picture above are almost normal colored instead of the steady blue they were last winter. Things are getting better for the Blue Lipped Zebra!!

Things are happening outdoors. I’ve been watering and babying the plants that were injured in the hard freeze that we had a couple of weeks ago. I am so happy to report that every single rose bush has put out new growth and all the shrubs that I suspected were dead suddenly had leaves appear today. (Okay, there is one lilac that I have given up hope for, but everyone else is back!) Things are starting to look pretty promising outside.

When I lived in the San Diego area poinsettia grew outside all year long and were huge shrubs. I’m hoping that this plant will rebound and grow to be nice and healthy before I have to bring it back inside in the fall. With luck I will have red flowers again for Christmas and the holidays.

I polished off two books this week while knitting on that sweater after struggling to read for several days.

The Last Emperox by John Scalzi is set in a scenario where civilization as they know it is collapsing and the rich, powerful corporations are all scrambling to secure as much profit and security as they can in the unfolding chaos and uncertain future. There are machinations, betrayals, assassinations, and blantantly unscrupulous business practices that completely ignore the welfare of “the little people”. I put the book aside because it just wasn’t a plot I wanted to deal with at the moment, but when I went back to it this week the message turned and at the end of the book things had been put aright. People who were competent and focused on the good of their population were in power, science had saved the day, and great sacrifices were bringing a new structure to the universe. Yay! That was a message that I wanted to read after all. Feeling pretty upbeat I went back to another book that I had abandoned. 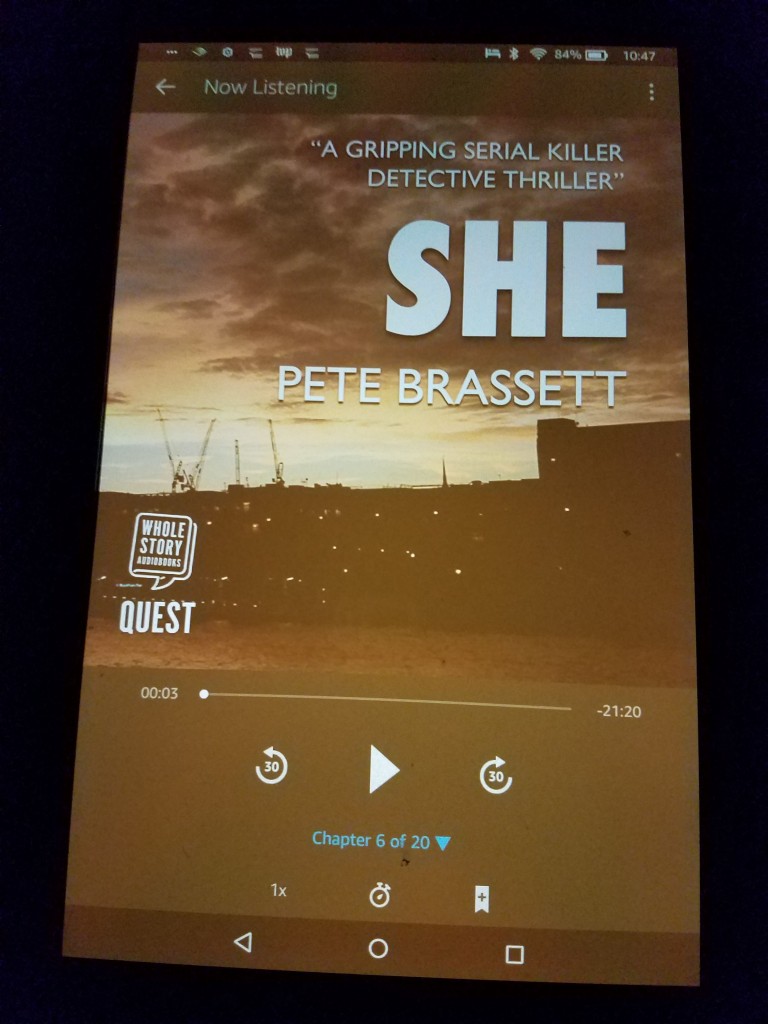 She by Pete Brassett was another book that I had set aside because it was about a serial killer. Ugh. I’m so over sociopaths! I went back, however, and found that after a rocky start the main characters were richly complicated and likable. The lead detective, Munro, had stopped badgering and terrorizing his underlings, and West, his main underling and partner,   started being more secure and honest in her dealings with life and Munro. The story was well paced and had lots of twists and turns.; plot developments were believable, but not obvious, which was great. Even better, the serial killer was not glorified. I was racing through the book (and my sweater) after the midpoint and now that it is finished I have downloaded and started the next book in the series.

Well, that’s all for the week.

Please, please, everyone, be safe!

Remember to read a little, knit a little, and garden like your heart can’t live without it.