Well, this was a week. It seemed much, much longer, but really, it was only a week. My youngest son alerted me that he was battling some type of infection early in the week and the news stations began alerting me that the weather was going to be just wacko for a few days. The forecast was so crazy we made the national news. 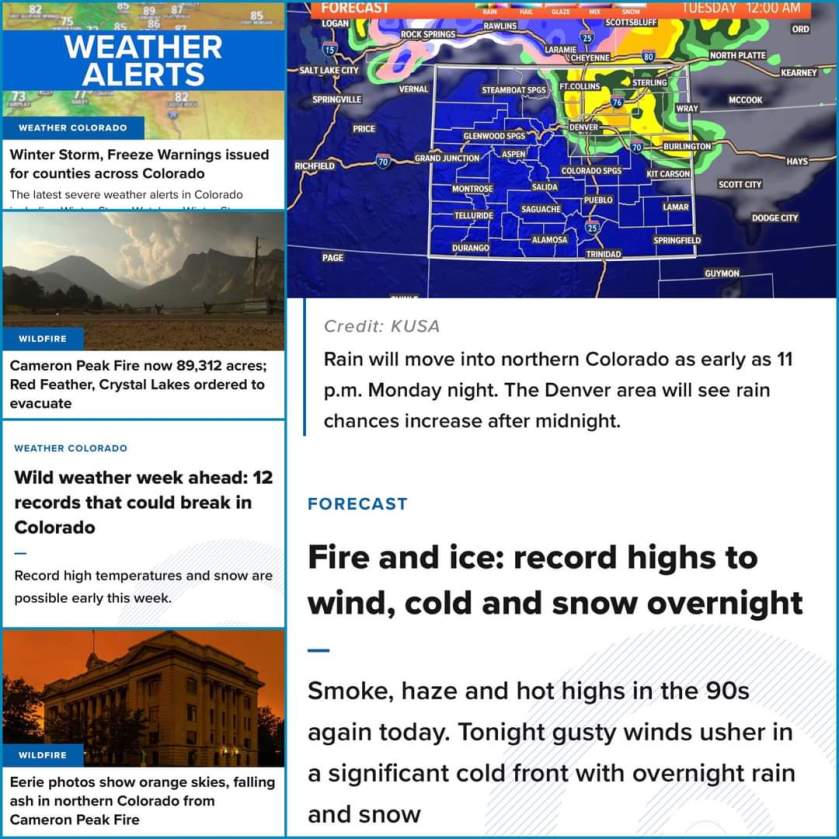 Yep. We broke a record for the heat amid warnings of a serious snow storm on the way. The smoke from wildfires in the mountains west of me kept the sky a dirty white color and the sun a sullen red ball as I brought all of the potted plants into the garage for safety before the expected snow and hard freeze. The temperature dropped over 60°F in 24 hours and I had to start up the furnace. I covered the roses to protect them and my son started a second prescription of antibiotics.

Two days later the weather had warmed up again, the snow was gone, and I had carted all of the potted plants back outside for a few more weeks of sunshine. The fires in the mountains were chugging back to life after a few days of respite during the snowstorm, and a text had came from my son that started with, “Don’t panic…” His doctor had sent him to the ER, he was transported to a second hospital where he had emergency surgery and landed in the ICU on a respirator overnight. This afternoon he is off the respirator and sending me text messages again while I make calls to his nursing team. Because of Covid I’m not with him right now and I JUST HATE 2020!!! I think that we are all due a break.

This was a week for garter stitch for sure. I did some work on the new Misurina sweater early in the week, but by the end of the week, aware that my son was not getting better on his antibiotics, I was all garter stitch, all the way.

The colorwork sections of the yoke are separated by little cables, can you see them there in the grey? I was catching the floats in those cable stitches but you can see them peaking through because of the loose gauge so I am just making really long floats now. I don’t like to do that in general, and I have an idea of catching them later on with some clever stitching with grey yarn if they are a problem, but for now extra long floats are the plan.

Lured into a sense of autumn by the cold and snow I cast on another garter stitch shawl using some Mad Tosh sock yarn in the colorway “Rocky Mountain Colorado” that looks like all the colors of fall.

The large garter stitch shawl is finished off with a lace border in a nice contrast color that can pick up one of the colors in the garter fabric. I kind of want to use a dusty pink that I have, but I’m also tempted to buy a beautiful saffron colored yarn I saw online. So many decisions in a week gone bad! Right now I’m just going to keep knitting and once I’ve got more yarn into the shawl I’ll have a better idea about which color I want to highlight. The trick is to make the colors sparkle instead of toning down the shawl… Ironically, because of the extreme heat followed by a hard freeze, the fall colors in our mountains won’t be that nice this year. Thanks again, 2020!!

Right before the rain started I went out into the smoky air and took some pictures while moving plants into the safety of the garage.

The stonecrop came through the storm just fine under the tubs I covered them with and the bees are back. I haven’t spotted the backyard bunny again, but the squirrels are putting on a show in the front yard for Hannah as they race around the front ash tree. As I took the knitting pictures yesterday I spotted this under my Douglas Fir (the only good Doug is a dead Doug… poor maligned tree): an owl pellet!!

A little calling card from one of the great horned owls reminding me about the circle of life.

By the way, the mountain lion has been seen a couple of more times, but not in my backyard, thank heavens!!

The Pull of the Stars was great! Set in Ireland, it is the story of a nurse working in a small ward with pregnant women stricken by influenza during the Great Influenza pandemic in 1918. The characters are rich, the historical setting and issues ring true, and I chomped my way though the book in just a couple of days. Along with the pandemic there are threads about the great war, shell shocked soldiers, the fight for Irish independence, prejudice against women, and the abuse of the “pipeline” that consumed women and children not protected by the sanctity  of marriage in 1918 Catholic Ireland. 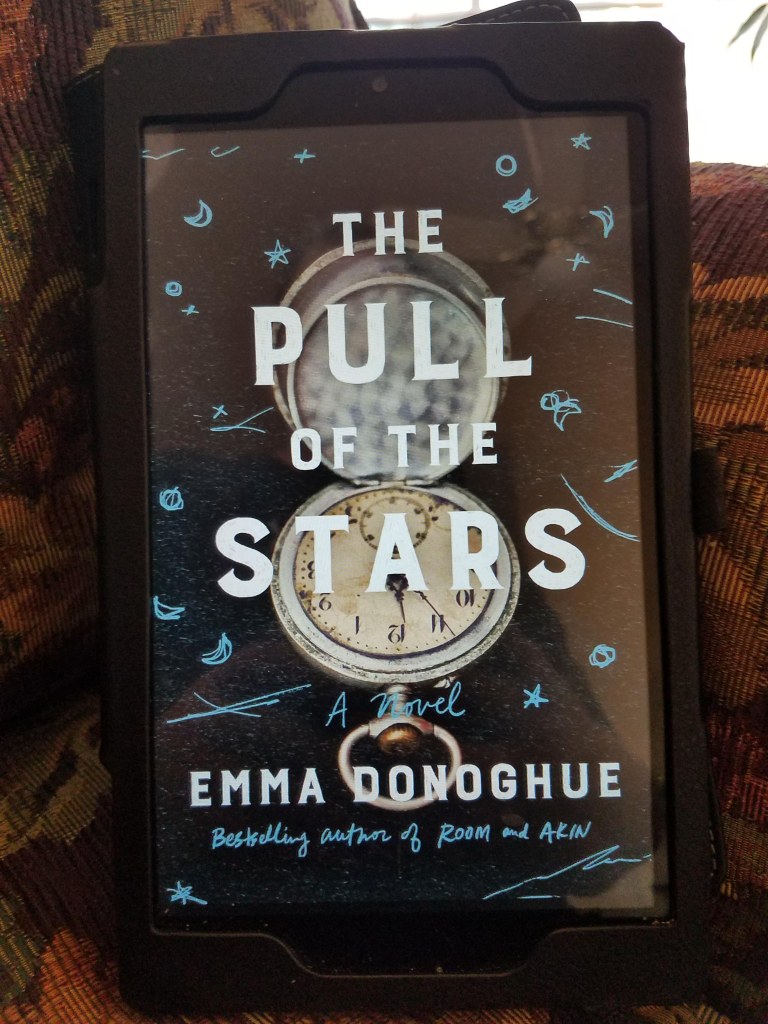 The title is a nod to the origin of the word “influenza” which comes from an Italian outbreak in medieval times that was attributed to the influence of the stars.Our heroine nurse records each death and loss as tiny scratches on her watch. A moon for a lost mother. Tiny lines and half moons for stillborns and premature births. Every loss is recorded in time from an illness poorly understood and difficult to control. Kind of haunting, huh.

So I attended the live discussion with the author of this book at Barnes and Noble, and it was great! The author, Emma Donoghue talked about her work and answered questions from viewers that were general ones like “why did you choose this situation” or “how difficult was it to portray medical understandings of a century ago”. It was fine, but I also would have like to just “talk” about the book, the characters, and their actions with the other participants. Nope. No spoilers allowed. There must be a way to have reader chit chat just like the real book club would do. I guess I’ll keep digging and maybe ask B&N if there is a way that can be set up. It would be just another Facebook group, right?

Have a great week, everyone!!

Read a little, knit a little, and garden like your heart can’t live without it.

Be kind to each other and stay safe.

It’s time for me to call the hospital again.

I weave, knit and read in Aurora, Colorado where my garden lives. I have 2 sons, a knitting daughter-in-law, a grandson and an exceptionally spoiled kitten. In 2014 I was diagnosed with a serious rare autoimmune disease called systemic sclerosis along with Sjogren's Disease and fibromyalgia. View all posts by Midnight Knitter