I’m always on the hunt for a good science fiction novel. Like many other readers of the genre, I’ve run into my share of books set on multi-generational space ships traveling to distant stars. Some of these books are great, and some not so great. The problem, I think, is in creating a believable world within the boundaries of the ship while spinning the tale for the reader. Some authors get lost in the technical details of creating an independent, self-sustaining world and social culture within the ship and forget that they meant to tell us a story. Others remember the story but it is set in such a flimsy framework that it just doesn’t work. Every once in a while, however, I come across a book that strikes the right balance and is just great. 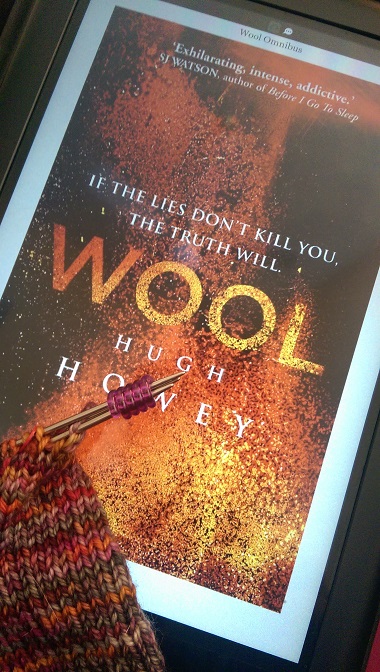 Hello, Wool by Hugh Howey! This book isn’t set in a spaceship traveling to a distant star, but in a silo with 144 levels set deep into the earth. The silo is closed off and completely self-contained, and the few thousand residents have lived within it for hundreds of years. Everything on the surface of the planet is now dead, and the only chance for the survival of our species is to stay within the closed ecosystem of the silo until the earth recovers. Instead of traveling to a distant location, the residents of the silo are time travelers to a distant future and the journey began a long, long time ago.

Here’s the deal: nothing is what it seems. It isn’t clear how the earth was destroyed, and the residents have no notion of any other world other than the one that they live in; their history was lost when computer servers were wiped during a past rebellion. There is a rigid social structure within the silo, and reproduction is carefully controlled by lottery while dead citizens are “recycled” in the gardens that grow food and produce oxygen. The lowest levels of the silo contain the critical power plant, the mines and the oil production facilities. The top levels contain the workers of the more “white collar” occupations. Gluing it all together are the major administrators: the mayor, the sheriff, and the head of the IT department. It is essential that the status quo is maintained. Dissension and rebellion are ruthlessly repressed, and it is absolutely forbidden to express a desire to go outside; to do so is a death sentence.

Mr. Howey has created a fantastic immersive world within the silo; it is believable and hangs together extremely well. (It is so real that fans have been sending him schematics of the silo…) The story is also great; it begins with the death of the sheriff and a subsequent power struggle. As events unfold it quickly becomes apparent that the world in the silo isn’t what it should be; lies are being told, there are mysteries within mysteries, and the hunt for the truth is very dangerous. There are deaths, rebellions, a heavily guarded IT department, and so many secrets. Our girl, the newly recruited sheriff Juliette Nichols, is determined to get to the bottom of things. The trouble is, the truth may be even more dangerous than the lies.

I loved this book! I was dragged in by the suspense and driven to understand what was going on. The characters are complex and well constructed; their stories were so real to me. I bought the next two books in the Silo series, Shift and Dust, and just kept reading. These books  bring new characters into the story, and as the pages went by I started to understand how everything hung together. The resolution of the story and the integration of all the independent characters was a little weak at the end, but altogether the three books were great and I am on the hunt for another book by this author. Gosh, I hope they make a movie of this!

If you are a science fiction fan that doesn’t necessarily need a space ship, this book series is for you.

I weave, knit and read in Aurora, Colorado where my garden lives. I have 2 sons, a knitting daughter-in-law, a grandson and an exceptionally spoiled kitten. View all posts by Midnight Knitter

4 thoughts on “WOOL by Hugh Howey: That’s no spaceship… it’s a silo!”