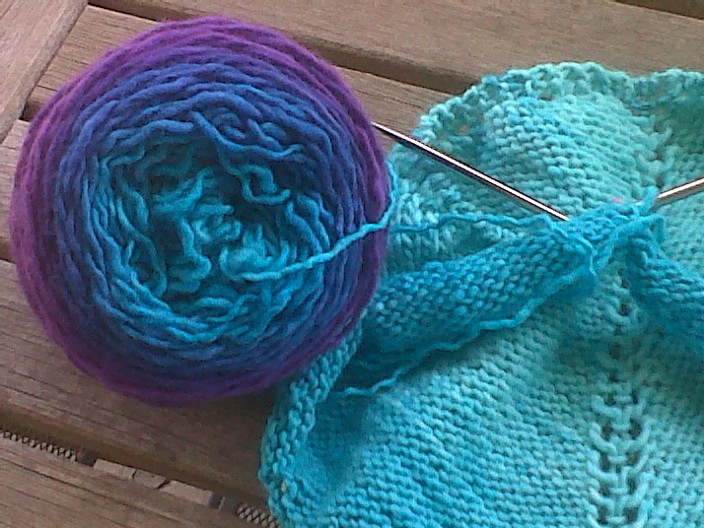 What can I say? I had some more of the Freia yarn in a turquoise-blue-purple colorway called Blue Velvet, and a tube of beads that kind of looked like they would go with the yarn. The beads , size 6, are called Serenity Mix by Miyuki. I had to get knitting!

The last time I knit this cowl (Zuzu’s Petals by Carina Spencer) I was reaching the end of the cowl just as I arrived at the most flashy color in the ball of yarn. To get some of that color into the cowl I knitted a picot edging to use up more yarn and to make sure that I captured the color. I weighed the leftover yarn from the first cowl and discovered that it was 7 grams. To reduce the amount of light yarn for this new cowl, and to maximize the amount of purple color at the end of my cowl project, I pulled off 5 grams of yarn from the middle of the ball before I cast on.

I decided to attach the beads to only the lace portion of the cowl, and only in the part of the pattern that was one knit stitch with a yarn over to either side of it. (YO, K1, YO). To attach the bead I slipped a bead onto this isolated knit stitch with a small crochet hook, put the stitch back onto the knitting needle and then knitted it.  This placed the bead at the tip of the petals in the lace pattern.

The edging of the cowl has a pattern of stacked YO,K1,YO sections. I added a new bead into each of these knit stitches.

When I got to the end of the cowl I was just getting to the start of the purple yarn. Curses! I thought I was so clever to remove yarn at the start of the knitting, but it just didn’t work out for me . I had to put on another picot edging to get any of that purple onto the cowl. I weighed the leftover yarn again when I was done knitting, and there was 5 grams left over. I must have knitted tighter, or the yarn was a little thinner (this is one-ply rustic spun yarn), or… Such is life in the knitting universe.  Clever tricks will just get you so far. Another lesson learned.

Now I’m wondering what it would look like if I added beads in a scattered fashion through out the stockinette portion at the beginning of the cowl?  Heading to the yarn stash to see what I can find. 🙂

I weave, knit and read in Aurora, Colorado where my garden lives. I have 2 sons, a knitting daughter-in-law, a grandson and two exceptionally spoiled cats. View all posts by Midnight Knitter