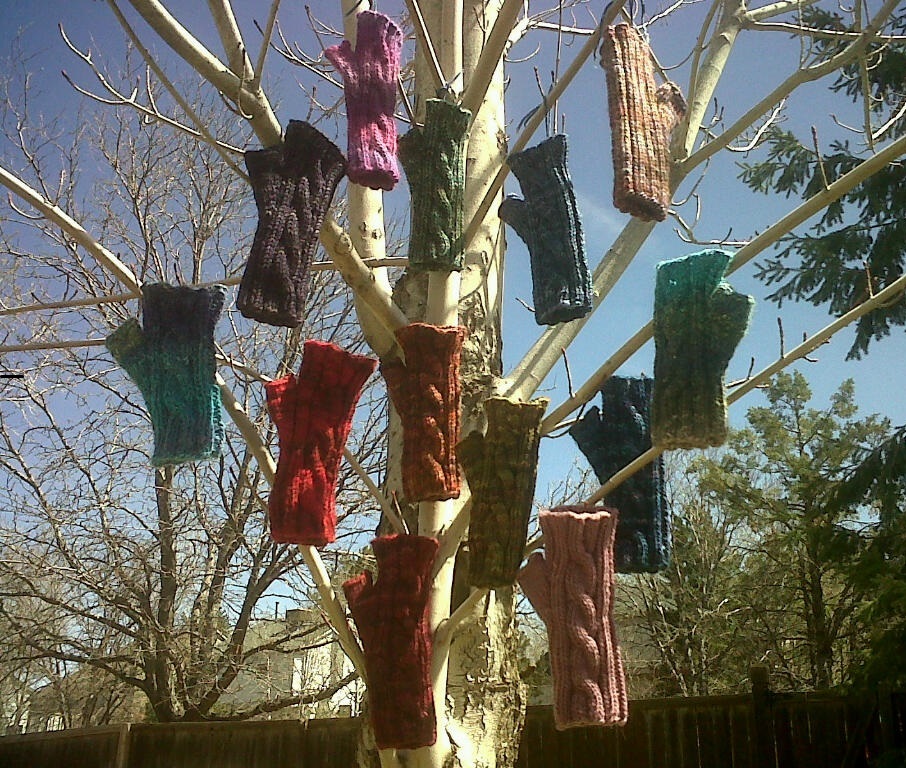 How much yarn is in that mitt?

So, I’ve gotten a little crazy with the mitt making. I’ve been making them while I watch television or read; basically they are something that I can produce while watching television or reading as they are kind of automatic knitting. Since I have so much yarn in the stash, they are kind of a stash buster at the same time. The only problem with this is that I don’t like making the thumbs as I need to focus a little on what I’m doing to make them. That’s how I found myself with 10 pairs of mitts without thumbs.

Good grief! I had to spend the entire weekend working on thumbs to get them finished. I watched all the episodes of Firefly again and settled into the project. While I was working I started to wonder just how much yarn was in each pair of mitts.

I have a little electronic balance that I use when dying yarn (to figure the amount of dye to use for the weight of dry fiber), and realized that I could use it to measure the number of yards of yarn in the mitts. I had already started using the balance to determine if I had enough yarn left in a ball to knit another mitt by weighing one mitt, and then the ball of yarn. If the ball weighs more than the mitt, there is enough! With a little calculator action and some simple algebra I could use the balance to get my yardage.

Since I had so many pairs of mitts that were made of the same yarn (but different colors…) I was able to weigh all 10 pairs and then figure the average. These mitts (the Darwinian Mitts pattern on this blog)  made in Malabrigo Rios yarn weigh 43 grams each. To make sure I was measuring the amount of yarn needed in the construction of the mitt and not just the yarn in the finished mitt I weighed them before weaving in and trimming off all the loose ends.

Now for the math! Malabrigo Rios comes in 100 gram skeins with about 210 yards according to the wrapper. I’m just going to take their word for this. Since my mitt weighs 43 grams, and if I use “X” to stand for the number of yards of yarn in my mitts, the relationship can be expressed as:

Then if I cross multiply so that I can solve for “X” I get:

This can be cleaned up by cancelling out the grams and dividing the 43 by 100 to convert it to a decimal. That leaves:

Which forced me to use a calculator. When I multiplied the numbers I discovered that in this case:

Which is the number of yards of yarn I need to create these mitts. This is great, as I have some skeins lurking in the stash that are right around 100 yards, and I think that I will put some of them on the needles to see what they look like as mitts.

Now that I have worked this out I think that I see the pattern that I can use to do future calculations. If I know how many yards are in 100 grams of yarn, and I weigh my knitted item to get the number of grams in it, I just need to move the decimal place over two places to the left on the weight of my knitted article, and then multiply that number by the yardage in 100 grams of yarn. Fast, easy, simple.