There are small moments when everything that you know suddenly shifts in its frame and the future becomes something that you never imagined could come. You get a diagnosis, you fall in love, you win the lottery. Such was the moment when, while teaching my third period biology class, I glanced towards the door to see an assistant principal and a counselor standing there motioning for me to come out of the room. Once I was in the hallway with them the questions started: Where are your children? Where does your husband work? It was the day of the Columbine shooting.

Columbine High School was one of the two major high schools in my community. My youngest child had just graduated from the other school, Chatfield Senior High, the previous year. I and my immediate family were safe, but the impact was still dreadful. That night I drove home past police in assault gear standing guard at critical intersections; they had positioned road equipment to block the intersections if the “terrorists” tried to escape.

I was a high school teacher. I knew that there are many dark sides to kids in crisis. I imagine that this is also true of the general population, but I had seen enough in my classroom to know that some young people want to burn the world down, and death is not a deterrent to them; the young can be very volatile and especially vulnerable as they are still becoming stakeholders in society. I was pretty sure that the attack was actually being done by students. At the time it was hard to imagine; now we know better.

The impact on the community was dreadful. Here are some of the standout memories: 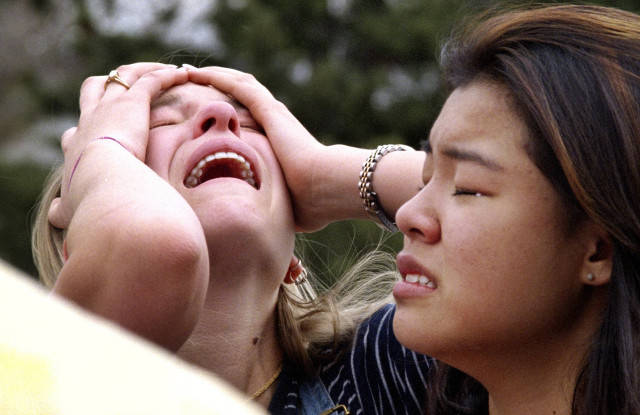 Columbine was closed for quite some time after the shooting, and the students of Columbine HS finished their year at the high school near my house, Chatfield; the school ran split sessions to accommodate the two student populations in one building.  Early in the evening right before the Columbine students started at their new school I drove past Chatfield on my way out of the neighborhood, and I saw that Chatfield had been wrapped in a huge ribbon that combined the colors of the two high schools: silver, blue and magenta. There was also a sign that said, “We Are One”, a play on the school district number, R-1. The two schools would become one.

We Are One, I told myself. I turned right and started driving down the hill towards the golf course to the north. Streams of parents were coming up the hill on both sides of the road, clutching each other, walking back towards the high school. They were the parents of the Columbine students, coming to a meeting at the school where their traumatized children would end the year. I continued down the hill and across the bridge with tears streaming down my face.

Today I live in Aurora, Colorado, and everyone knows about the shooting that happened in the theater there. I blogged about my dismay at the huge gun culture (and the money it produces) as evidenced by the unbelievable plethora of gun (shooting) related magazines in the local book store last July. Then last year there was a mass shooting in San Bernardino, California, which is the town where I grew up as a girl. How many mass shootings will I have to deal with in my life? Why should anyone ever have to deal with even one?

Orlando, my heart is broken. I am so very, very sorry that this has happened to you.