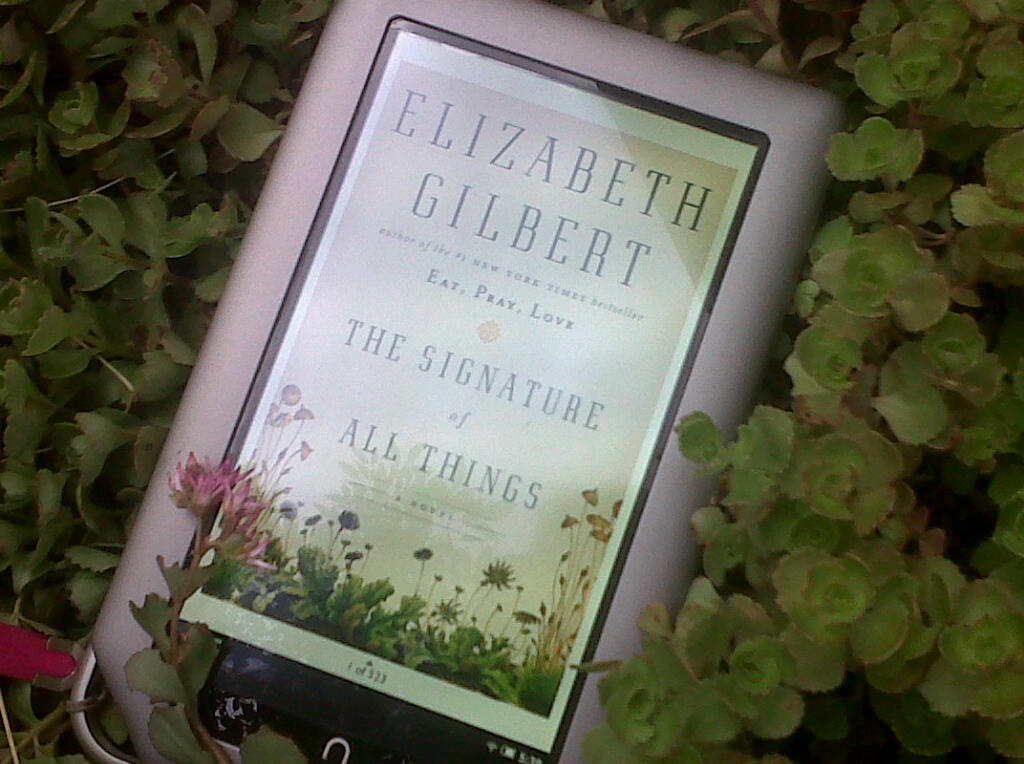 It seems that my life has become an exercise in synchronicity and random coincidences. I checked a book out of the library, read one that had been sitting on my NOOK for weeks, picked up a book on a sale table at Barnes & Noble, and remembered a video that I used to show my biology classes each winter. Strangely, they all fit together. No matter what I thought the book would be about, it began to talk about DNA and evolution at some point. How bizarre! All three books (The Signature of All Things, The Sociopath Next Door , and Orfeo) echoed things that I remembered from the video series Intimate Strangers: Unseen Life on Earth, which was broadcast in November 1999 on PBS. All these connections are just churning around in my head; here’s my thoughts about the video and one of the books, The Signature of All Things by Elizabeth Gilbert..

The episode that I’ve become fixated upon while reading these books is the first one in the Intimate Strangers series, The Tree of Life. If you would like to actually watch this episode (and all the others, of course) they are housed at Microbe World. The  biology classes saw this video when they were learning about taxonomy and the kingdoms of life.  In the video we meet Dr. Carl Woese,  a microbiologist of singular vision and drive. Working alone for years, chasing patterns in the mutations of a small, heavily conserved region of DNA, he pieced together the pattern of relationships between living things on earth. Using this information, Woese was able to determine the sequence of descent, establish common ancestors and eventually created a new “Tree of Life”. His work shook up the taxonomy world as domains were created (a grouping above “kingdom” in the normal sequence of “kingdom, phylum, class, order, family, genus, species”), and our understanding of evolution was enriched and altered forever. One man, working alone, chasing patterns in the musical score of life that is DNA, was able to change our view of the natural world.

This is what Dr. Woese says on camera in the video:

You have to have your own particular sensitivity to the world, and there has to be parts of it that are beautiful to you, because they’re beautiful to you regardless of what anyone else ever thinks. You see this all the time in an artist, and you see it also in good scientists.

This brings me to The Signature of All Things. In this book we meet Alma Whittaker, the daughter of a botanical robber baron. Raised in a wealthy and enriched environment that encourages learning and allows Alma to meet many eminent people in the scientific world, and possessing the logical mind of her mother, Alma is nonetheless trapped within the small world of her father’s estate. She sets up a lab in the carriage house, explores the land around her, and spends the majority of her life studying the world of mosses and liverworts. Small as her life becomes contained within the estate as she handles her father’s business and the details of life, it allows her to follow her “own particular sensitivity to the world” as she observes the interactions and changes in her moss populations; in truth she sees that mosses living within a timeframe much slower than our own engage in the same behaviors as the animal kingdom around her. It is a life of study in a world that is beautiful to her, and Alma is a good scientist.  Life altering events cause her to leave the estate following her marriage and the death of her father, and she travels to Tahiti and Holland, where the glory and chaos of a larger world help her develop a theory of evolution based on her understanding of mosses. This theory, while never published, propels her into a new life within her mother’s Dutch family and she obtains standing in the scientific community based on her own merits.

This was a good book. I’m a biology geek, so of course I liked it! Is it believable that Alma could have slowly come to a theory of evolution on her own? Sure. This book is a glimpse into the world that gave birth to the original theory. Science can always be pursued by a committed individual of observant and reflective nature. This was the time of Charles Darwin, Gregor Mendel, and Alfred Russel Wallace; Alma would have had access to the same ideas and published works that they had. All three of these men worked alone as gentlemen scientists, observed nature, designed experiments and looked for patterns. They wrote each other and shared their scientific ideas. Darwin and Wallace arrived at the mechanism of natural selection through independent work at about the same time; they published jointly in 1858. Mendel published his work in 1866, which would have been extremely helpful to Wallace and Darwin, but they missed the boat on that one! It will be almost 100 more years before we understood that the molecule of inheritance is DNA, and many more years before Carl Woese read the musical score of DNA to finally see the signature of all things.

Alma never publishes her theory because it can’t explain why all people aren’t sociopaths. Why does altruism exist, she wonders? How can natural selection account for what we see in people around us? Richard Dawkins addresses this very issue in The Selfish Gene. Guess what’s next on my reading list?