The Mother of Cats has been a severe disappointment for just weeks and weeks. She caught some kind of cold early in December, carried on like a baby for over a week (nasal spray, salt water gargling, boxes of tissues… Yellow Boy and I became quite concerned about her mental health…) and COMPLETELY ignored our needs. As if that wasn’t enough, when she finally got over the virus, she then became even worse. She slept for hours and hours, stayed in her bed even when she was awake, and totally failed to deliver our cookies on time. SHE DIDN’T EVEN DO CHRISTMAS!!! which is totally our favorite time of the year. Hello… Christmas trees = world’s best cat toys. How could she have failed us this way?

She said she was in a flare. Whatever.

When she was awake she worked endlessly on these socks for her cousin’s Christmas present.

The Turkish Hell socks were packed up last week and mailed out. On Saturday, the last day of Christmas they arrived safely in their new home. They had better behave themselves and last for years and years; I would hate to travel all the way across the state to whack them into shape!

I’m such a good boy.

Notes from the Mother of Cats:

These socks, called Classic Kilim, are from the book Around the World in Knitted Socks by Stephanie van der Linden. The socks were supposed to have tassels and embroidery; that so did not happen!!Here is the info on Ravelry with more info about the book. My notes on Ravelry are here.

On December 1st I got my pneumonia vaccine even though I had been struggling a little that week. That night my youngest son became ill with complications of diabetes and was rushed to the ER . I spent the next 2 days/nights at the ICU with him. Yep. About the time my son returned to work and I moved back home I was sick;  my autoimmune diseases flared while I was fighting through the viral illness. My Sjogren’s symptoms have been off the chart and crushing fatigue and brain fog appeared along with them. This week I am better and have been knitting up a storm and planning blog posts. Hopefully I’ll be online again in a couple of more days. 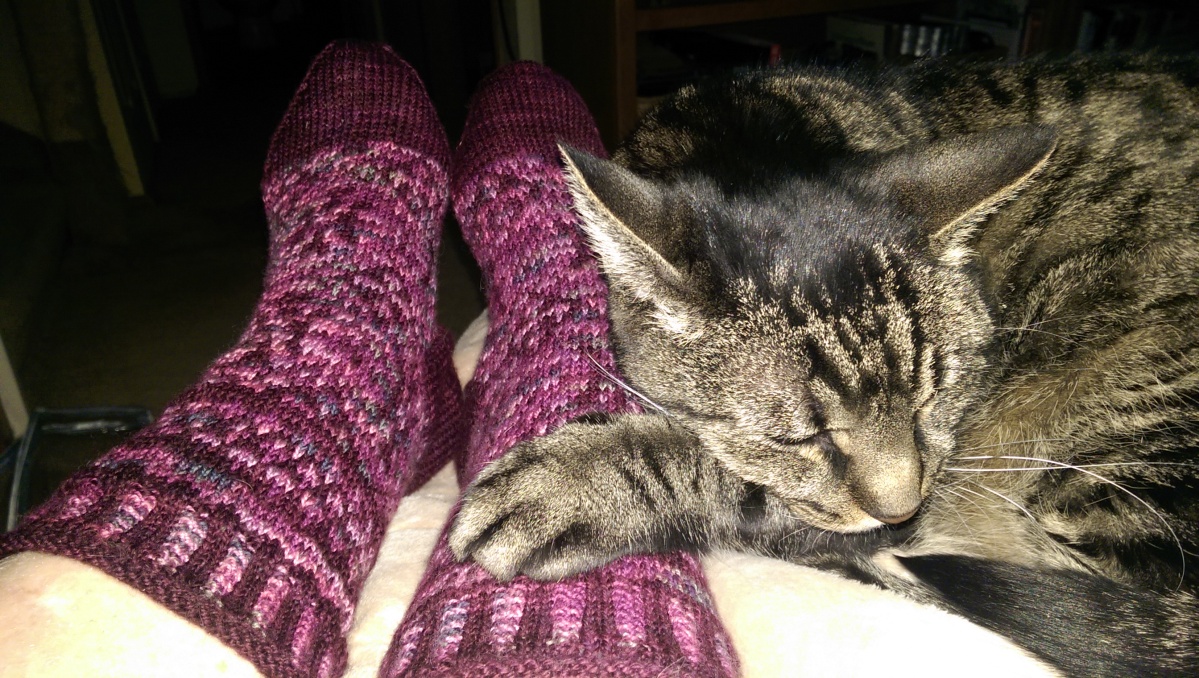 There is a whole week of January to go, and I have the first 2015 Resolution sock done. Isn’t this a sock that will make the most dreary of days seem happier and brighter? As usual, it has been approved by my cat MacKenzie who loves all things wool.

I’ve already decided on the pattern for the February sock, but when I dug through the stash I found that I didn’t have worsted-weight yarn in the colors that I wanted. Actually, I hardly have any worsted weight yarn at all. I do have some white wool that my DIL brought back to me from her trip to Ireland. I don’t want to give anything away, but are you all up for some yarn dyeing?

Woohoo! Indigo and raspberry wool dyes, here we come!! Really, it will be fun. 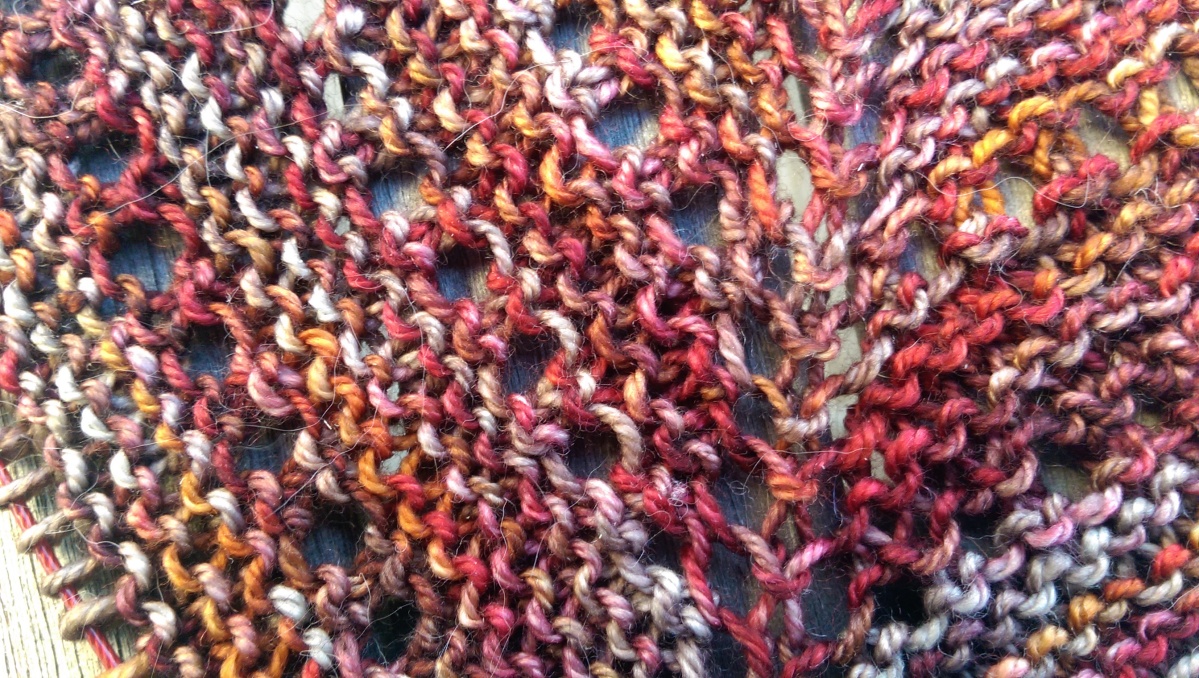 The sun is out today and the meltdown is in full swing. Yeah! Sunshine! It is supposed to be fairly warm for the rest of the week and I am rocking the knitting because my hands are so much happier when they don’t have to deal with single digit weather.

So, I got a lot done, but nothing is finished. I’m still working on three projects (and am resisting casting on another pair of socks. Darn it, there is a pink cashmere blend yarn that is calling to me…) Here’s where I am.

The January sock is still just chugging along, a few rows at a time. The problem is that I need to use the chart to do the pattern, and the cats have decided that they want to sit in on my legs while I knit. They dislike cold snowy days even more than I do! Today I threw them outside because it was warm and I got through the heel on the first sock and am now working my way down the gusset. Looking good!

The cashmere blend 3S Shawl is almost done! I have only another 20g left on the ball. This is easy knitting and I am doing it while watching television in the evenings. Maybe, maybe, maybe it will be done Friday. 🙂

Finally, I am working on the little lace mitt using 2 small cable needles. I have finally adjusted to the cables (instead of using double pointed needles) and really like how I can carry this small project in my purse without the danger of stitches coming off the needles. Looks like this project is the one that is coming in last as I’m spending most of my time working on the other two.

Sock: Riot of Color from Around the World in Knitted Socks by Stephanie van der Linden. The yarn is Baah! Yarn La Jolla

MItt: I heavily modified the pattern for the Sweat Pea MItts that I found in Lace One-Skein Wonders. 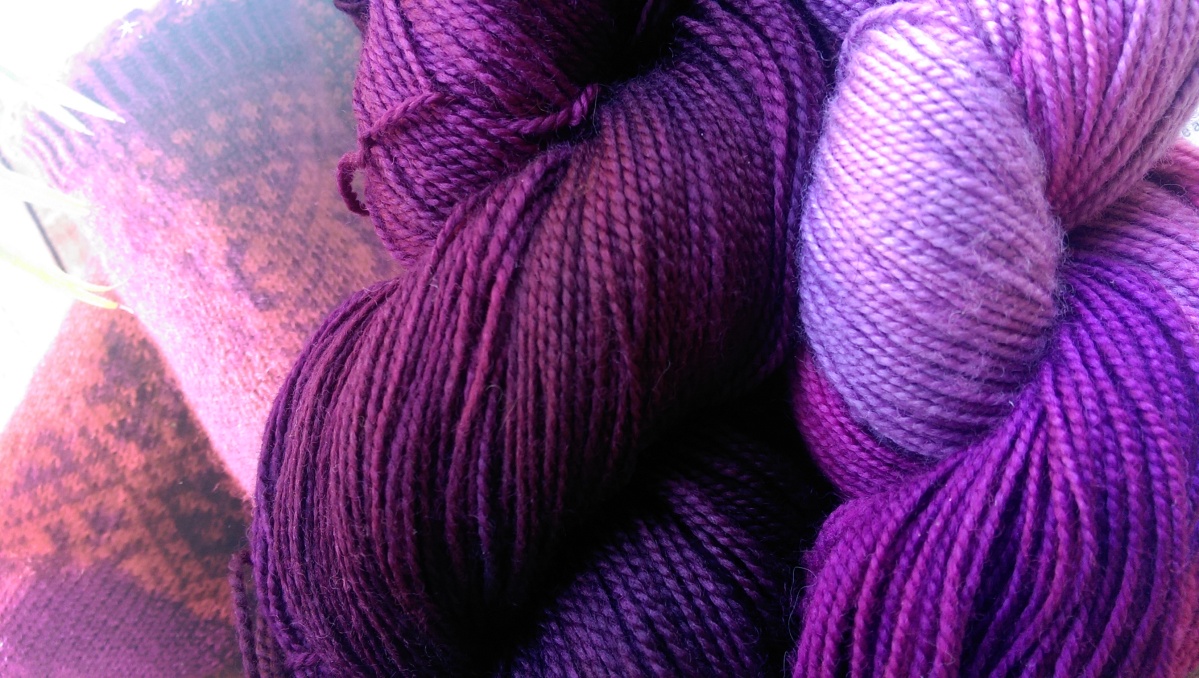 On New Year’s Eve I made some resolutions for myself. What was I thinking of? Obviously a moment of weakness! One resolution was the promise to select sock patterns from my collection of sock books, and to then knit one sock a month using only the yarn in my stash. Hey that’s a good resolution, right? I end up with at least 12 new socks and make a dent in the stash at the same time. Happy feet!! Sad wool moths. It’s all good!

I had a lot of fun the first week of the year digging through books to select patterns, but decided to finish some of the projects I already had going before I started the resolution socks. Friday I finally went digging in my yarn stash to see if I could find some fun yarn combinations to make a Fair Isle type sock. I had in mind to make the “Riot of Color” sock in Around the World in Knitted Socks by Stephanie van der Linden.  I settled on two hand painted sock yarns with the idea that they had enough contrast to show the pattern, but there would be enough overlap in colors that the pattern would fade in and out a little.

Perfect! I wound the yarn into balls while visiting one of my sons Saturday, and today I settled down to knit. This is what I had produced by dinnertime,

Sweet! It looks warm, doesn’t it? My little feet have been really cold this week, so that is a big bonus right now.  Oh yeah, I will be knitting away on this baby pretty steadily for the next couple of weeks. Here’s my project page for this sock if you would like to get more information about the yarn colors and needle size.

Stay tuned everyone. I hope to have these done long before the end of the month. 🙂